Prince Andrew’s Ex-Girlfriend Koo Stark: Where Is She Now?

The Peacock documentary “Prince Andrew: Banished” by Jamie Crawford investigates the claims made against the Duke of York, the late Queen Elizabeth’s second son. The documentary investigates Andrew’s alleged relationships with Ghislaine Maxwell and Jeffrey Epstein as well as Virginia Giuffre’s claim that Andrew sexually molested her while she was a teenager. His friendship with Kathleen Norris “Koo” Stark in the 1980s is also mentioned in the movie. So, if you’re curious as to Koo’s whereabouts right now, here’s what we know. 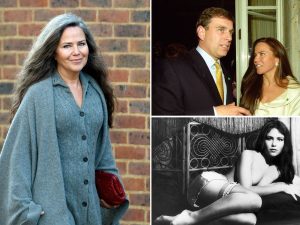 Also Read: Laura Harrier On Mike Hulu: Who Is She? Meet The Actress Playing His Ex Girlfriend Robin Givens On The Show

Contents hide
1 Where is Koo Stark Today?
2 Who Is Koo Stark?
3 When did she meet Prince Andrew?

Where is Koo Stark Today?

Born to parents who worked in the entertainment business, Kathleen Norris Stark soon followed in their footsteps. She made appearances in a number of movies in the 1970s, and Princess Leia from “Star Wars” was allegedly a role she was considered for. Koo stated in 2016 that she was offered the role rather than the small part she ultimately played in the movie (her part was later cut). Koo was working as an understudy in a theater performance in London, England, in 1981.

There, Koo and Prince Andrew were arranged for a blind date. They clicked right away, and shortly after, they started dating. Koo met the royal family in the following few months, and the Queen reportedly took to her. They dated both before Andrew enlisted in the Falklands War and thereafter, but by 1982, the media learned of their relationship, making it difficult for them to go about their daily lives.

Koo subsequently recalled, “The paparazzi were everywhere, and the attention at the time was extraordinary. I once got dragged off a motorcycle by my hair, and a long lens struck me in the solar plexus. Motorbike photographers literally rode into restaurants to try to capture a photo of us together. Every time my address was published for two years, I moved.”

Who Is Koo Stark?

Koo had a role in an arthouse movie with some sexual scenes in 1976, it was later discovered. She was ultimately deemed unsuitable as Andrew’s partner, and their relationship, which had lasted 18 months, came to an end. Koo later claimed that their relationship suffered as a result of the fame. She described how she was was informed that she was on an IRA kill list in the early 1980s in 2021.

Tim Jeffries, the proprietor of a gallery, and Koo’s 1993 marriage ended quickly in divorce. Her daughter Tatiana was born about four years later, with Warren Walker as the biological father. Warren and Koo engaged in a protracted court dispute after their divorce. Before being exonerated in 2013, when she gave him an artwork back, she was charged with stealing it. She further asserted that Warren agreed to provide her a lump sum payment in addition to an annual sum of money, but Warren denied this, and the judge found in his favor.

Koo also experienced financial difficulties, filing for bankruptcy in 2011. When the charges against Prince Andrew were made public in February 2015, Koo spoke up for him and said, “My immediate emotion was fury, followed by astonishment, at the lurid allegations being made against a man I have known well for more than 30 years. He was being accused of acting in the worst way possible. His life is being marred by the stain on his reputation like fresh blood from a wound. She dismissed Virginia’s allegations because she thought Andrew was innocent. Koo received libel damages from MTV in 2019 after being called a “porn star.”

Koo underwent a mastectomy in 2002 after receiving a diagnosis of breast cancer, and she later underwent a second one. Since then, she has stopped eating dairy and stays away from processed foods. Since starting her career as a photographer in 1982, Koo has conducted numerous exhibitions of her work and successfully applied her knowledge of yoga and meditation. In 1985, she also released a book about photography. Koo, a resident of London, has been inspired to write a memoir by the Dalai Lama. In addition, she has a tribute exhibition to photographer Julia Margaret Cameron scheduled for 2024.

When did she meet Prince Andrew?

In 1981, Koo and Prince Andrew were paired up on a blind date.

Prior to and following his active participation in the Falklands War, the pair remained close for about two years.

They vacationed together on the island of Mustique in October 1982.

They were said to be getting married after he took her to Balmoral to meet his family.

Andrew was in love, and the Queen was “extremely impressed with the stylish, intellectual, and discreet Koo,” according to Lady Colin Campbell.

However, the couple broke up in 1983 after topless pictures of the actress and a naked lesbian sex scene from Koo’s movie Emily appeared, along with pressure from the media, paparazzi, and palace.

1988 — Stark’s statement “It got too much for me to handle in terms of pressure and attention. It seemed like a nightmare.”

In a 2015 interview, the actress claimed, “He entered into my life and that was it: he was my life.”

Andrew wed Sarah Ferguson, the daughter of Prince Charles’s polo manager Major Ron Ferguson, in 1986 after splitting with the American.