‘The Watcher,’ a crime drama series that airs on Netflix and was developed by Ryan Murphy and Ian Brennan, follows a family that is comprised of a married couple and their children. The Brannock family, which consists of Dean, Nora, and their two children, recently relocated to a suburban home in New Jersey. However, the family’s seemingly perfect life takes an eerie turn when they begin to receive letters from an anonymous sender who identifies themselves only as “The Watcher.” The unidentified person claims to have been following the house and its most recent occupants with an unhealthy level of obsession. The whole family is in a state of panic as a result of the unusual occurrences that have been taking place within their home as well as the bizarre interactions that have taken place with their new neighbor.

The captivating narrative of the performance, which features Bobby Cannavale and Naomi Watts in the starring roles, manages to keep the audience captivated throughout its entirety. The terrifying sensation of always being observed and the anguish that accompanies it are presented in a way that makes it impossible for viewers not to empathize with the characters. The events that take place in the series are so chillingly true to life that fans cannot help but speculate about the motivations behind the plot. Is the show based on actual events that occurred in the past, or is it purely a work of fiction? So, in that case, we have compiled everything we know about it here! 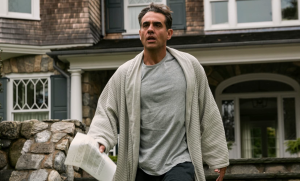 Is The Watcher a True Story?

There is some truth to the premise of the movie “The Watcher.” The spooky ordeal of a family, which was detailed in the eponymous report written by Reeves Wiedeman for New York Magazine’s The Cut, serves as the basis for the television drama. In actuality, shortly after Derek and Maria Broaddus began the process of renovating their home located at 657 Boulevard in Westfield, New Jersey, they began to receive peculiar letters from a person who only identified themselves as “The Watcher.” Although there are numerous discrepancies between the events depicted in the series and those that actually took place, the core of the plot has not changed in any significant way.

After he had finished painting for the day in June 2014, Derek Broaddus made the decision to check the mail on his new house before going to bed. He was going through his mail when he came across an envelope in the shape of a card that was white in color and contained a letter signed “The Watcher.” The letter began in a friendly manner and seemed to extend a warm welcome to the new family who had moved into the neighborhood; however, it soon took an odd turn. The author of the letter stated that their family had been watching 657 Boulevard ever since the 1920s, when the stranger’s grandfather first started watching the show. In the vicinity of 1905 is when the Broaddus family first built the home that they later purchased for a price of 1.3 million dollars.

The letter provided specifics of what “The Watcher” had discovered regarding the Broaddus family’s new residence and the changes they were making to their lives there. Derek’s plan to hire contractors in order to renovate the house was deemed by the stranger to be a “poor move” and was condemned by the stranger. You don’t want to upset the people at 657 Boulevard, do you? The new homeowners were reassured in the letter that the house would be content with youthful blood living in it and that the writer was aware of the family’s three children. This information was also included in the letter.

As soon as Derek saw the letter, he ran back inside the house and quickly dialed 911. He was petrified by the contents of the letter. After the police from the law enforcement agency arrived at the location, they questioned Derek about whether or not he had any adversaries. Following this, Derek went back to his family at home and then proceeded to write a letter to the former owners, John and Andrea Woods. After living in the house for 23 years, the Woods family reported that they had never had the sensation that they were being watched by anyone. They added that they believed no one else lived in the house. During their final days at the house, the couple admitted that they had, in fact, received a peculiar letter from someone who only identified themselves as “The Watcher,” but that they had given it little thought at the time.

After another fortnight had passed, the mailbox at number 657 Boulevard received another letter that was addressed to “Mr. and Mrs. Braddus.” The author stated that they already knew the names of the children, which were the same as what Maria had been yelling in the prior days. The writer claimed to have learnt more about the house and its new tenants and shared that they already knew the names of the children. It would appear that the stranger stated that the house was eagerly awaiting the family to move in, and the writer added how they were aware that one of the children enjoyed painting.

As was to be expected, the family became terrified about what to do and ultimately decided to cease bringing their children. This resulted in “The Watcher” sending a second letter, in which they inquired about the location of the family and why the house seemed to be missing them so much. Before this tragedy, the municipality of Westfield in New Jersey was widely regarded as one of the state’s most secure communities. This fact is important to keep in mind. Nevertheless, “The Watcher” made quick work of destroying that reputation. Michael Langford, whose home offered a convenient vantage point from which to investigate the crime scene, was one of the first people police questioned in connection with the investigation.

Michael had been brought in for questioning by the authorities shortly after the first letter, but the continued arrival of the letters, along with a failed ruse by the Broaddus family, seemingly cleared him of suspicion. The authorities had brought Michael in for questioning shortly after the first letter. In the following few months, the Broaddus suspected many of their neighbors and were greatly worried by the events that had transpired. They went so far as to consider taking legal action against the former owner of the property because they had not been informed about the mystery letter. Although no one has been arrested in connection with the incident, the Broaddus family was able to sell the house for $400,000 less than what they had paid for it when they initially purchased it.

Taking everything into consideration, we would like to restate that the events depicted in ‘The Watcher’ on Netflix are heavily influenced by the true story of the Broaddus family. On the other hand, the authors altered a few significant aspects of the story and took some liberties with their creative process. In addition to giving Dean and Nora Brannock only two children instead of the original three, the show also renamed the leading couple, altering their names to Dean and Nora Brannock. It is interesting to note that the story was also adapted by Lifetime for the production of the same movie, despite the fact that the Broaddus were not pleased with the decision.

Ryan Murphy and Ian Brennan are the brains behind the creation of the American real crime miniseries The Watcher. The series is based on the true story of a married couple who, shortly after moving into the house of their dreams in New Jersey, begin to receive harassing letters from a person who signs his or her correspondence “The Watcher.” The debut took place on October 13th, 2022. Author Reeves Wiedeman’s essay “The Cut” for New York Magazine served as the inspiration for his novel “The Watcher.”

As soon as the Brannock family settles into what was supposed to be their ideal home in the suburbs, it quickly deteriorates into a torturous place to live. The ominous letters that have been arriving from someone who only identifies themselves as “The Watcher” are just the beginning of the dark secrets that are being revealed about the neighborhood.

Also read: Is Netflix’s Athena Based on a True Story?