In the crime drama “The Good Nurse,” a nurse named Amy Loughren discovers that her co-worker and best friend Charles “Charlie” Cullen is a serial murderer who has been murdering people at the hospital where she works. According to what is shown in the movie, Cullen’s best friend Amy worked at the same hospital in New Jersey as he did, and that hospital was Somerset Medical Center. When detectives Tim Braun and Danny Baldwin approached her to talk about Cullen’s involvement in the fatalities that occurred in the hospital, the fact that she was in a relationship with him even hindered her from believing the same thing as them.

Amy soon came to the conclusion that her best friend was putting the patients they were supposed to safeguard in danger, which is what prompted her to join forces with Braun and Baldwin. The three of them were successful in bringing Cullen to justice, but did Amy’s relationship with him alter as a result? Are they still friendly with one another? 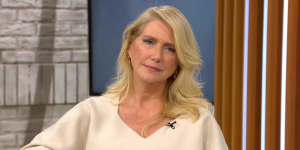 When Charles Cullen started working at the Somerset Medical Center’s critical care unit in September 2002, Amy Loughner was already working there. This is how they first became acquainted. Amy and Cullen worked several lengthy nighttime shifts together. During this time, the serial killer opened up about the struggles he had to go through, which had a profound effect on Amy. Cullen also shared his experiences with Amy. According to what Charles Graeber said in the film’s eponymous source material, “Charlie dished up comedic tales of severe despair, terrible luck, and bullied victimization with a sarcastic honesty he imagined Amy would connect to; she’d return with amusement and the mother attentions Charlie needed.”

Amy developed feelings of compassion for Cullen as she learned more about his past. “He [Cullen] was confident yet bashful, and he was always making fun of himself. He never lost his sense of humor in any situation. And yet, he appeared to be a clear underdog… Amy was quoted in The Times as saying, “I felt it was necessary to safeguard him.” Her choice to look out for Cullen marked the beginning of their relationship as friends. When she read through the records of the drugs that Cullen had removed from the dispensing system in order to kill victims, it had an effect on the link between them. Despite this, Amy was unable to immediately end their relationship with each other.

Amy maintained their friendship in order to coerce him into confessing to the series of killings he had committed. She went as far as to wear a wire for the authorities. After Cullen’s arrest, Amy continued to assist the investigators by approaching Cullen in the guise of his buddy in order to coerce him into confessing, as the movie shows. After the serial killer was put on trial and eventually convicted, Amy and Cullen were no longer friends. When she visited the serial killer who was serving time in the New Jersey State Prison, she had a realization about the same thing. Amy stated to The Times in the same interview that she had given to the paper, “I stood up when I saw him [Cullen], and he put his hand up on the glass and I put my hand up.”

She went on to say, “We leaned over, pressed our foreheads to the glass, and let out the most hideous wail we could muster.” Due to the fact that it was so overpowering, we eventually simply started laughing hysterically. The sarcastic sense of humor was still present. After that, however, it became quite clear that I was no longer conversing with my friend but rather with the person who had murdered my friend. After that, my friend Charlie stopped being my friend,” the nurse said, disclosing the reason why he was no longer her friend. As Cullen’s buddy, Amy faced a challenging situation when she agreed to assist Braun and Baldwin in putting him behind bars. Amy said with Glamour that she “knew that monster needed to be behind bars,” but she also knew that she was putting her friend Charlie behind bars.

Amy proceeded by saying, “I had a lot of trouble with that.” However, the numerous encounters she had with Cullen following his conviction allowed her to see that the guy whom she had respected prior to his arrest was not the same person he was while incarcerated. “I may have seen him in jail dozens of times,” she said. I was desperate for answers and I needed to know if I had hurt anyone by accident. I felt like I needed to put this chapter of my life to rest. […] I wanted to ensure that whatever my friend Charlie was, he was no longer there,” she continued. “I also wanted to make sure that my friend Charlie was not there.”

Ten years have passed since Amy and Cullen last spoke to one another. She was successful in ensuring that her “buddy,” who was allegedly responsible for the deaths of hundreds of patients over his lifetime, did not continue to exist before she was allowed to leave the prison. Amy was able to realize, with the assistance of this realization, that she was not betraying her buddy, but rather assisting the families of victims who passed away while they were under her care as well as providing assistance.

In the American drama film The Good Nurse, which will be released in 2022, Jessica Chastain and Eddie Redmayne will play the roles of two nurses, one of whom suspects the other of being guilty for a string of patient fatalities. The film is an adaptation of Charles Graeber’s true-crime novel of the same name, which was published in 2013, and is about the serial killer Charles Cullen. Krysty Wilson-Cairns is the one who penned the script, and Tobias Lindholm is the one who directed it. In addition to him, the film also stars Kim Dickens, Nnamdi Asomugha, and Noah Emmerich.

The Good Nurse debuted to the public for the first time on September 11, 2022, during the Toronto International Film Festival. The film was later shown in a limited number of theaters across the United States on October 19, 2022, and was made available for streaming on Netflix on October 26, 2022.

The difficult and stressful night shifts at the intensive care unit (ICU) are pushing Amy, a compassionate nurse and single mother who is battling a life-threatening heart disease, to the brink of her physical and emotional capabilities. However, assistance comes in the form of Charlie Cullen, a considerate and empathic colleague nurse who starts working at her ward. As the two spend many nights together at the hospital, a strong and dedicated friendship develops between them. As a result of this bond, Amy finally has trust in her own future and the future of her little kids for the first time in years. But after a string of unexplained deaths of patients sparks an inquiry that lays the finger of suspicion squarely at Charlie, Amy is compelled to put both her life and the safety of her children on the line in order to discover the truth.

The movie was going to be directed by Tobias Lindholm, and Krysty Wilson-Cairns was going to write the screenplay when it was revealed in November of 2016. Initially, Lionsgate was going to be the distributor. In the month of August 2018, Jessica Chastain and Eddie Redmayne began discussions over starring roles in the movie.

Since February of 2020, there has been no more announcement regarding the film’s production. Chastain and Redmayne have been tapped for leading roles, despite the fact that Lionsgate is no longer involved. Netflix has started the negotiation process to acquire the worldwide distribution rights for the picture for the price of $25 million.

Nnamdi Asomugha was the first member of the cast to join in March of 2021, followed by Noah Emmerich and Kim Dickens in April of that same year.

Stamford, Connecticut served as the setting for the first day of shooting on April 12, 2021.

A small clip from the film starring Eddie Redmayne and Jessica Chastain was used in the promotional video for Netflix 2022 that was released on February 3, 2022.

Read more: Is Carlo Marks Still In A Relationship With Girlfriend Shivani Ruparelia? His Children and Family